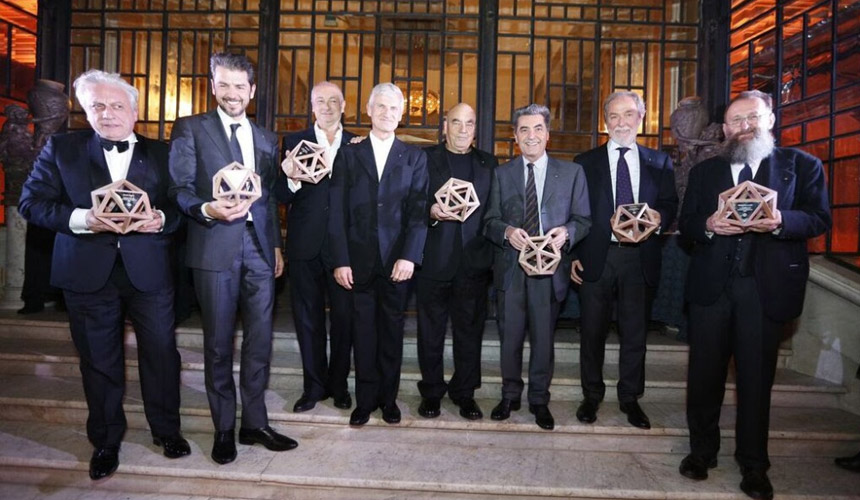 Mario Pedol of Nauta Design has been conferred with an Honorary Membership in the Altagamma Council.

On November 25th 2015 the Fondazione Altagamma named seven new Ambassadors of Italian Excellence during a gala dinner held at Villa Laetitia in Rome. The new holders of this prestigious title are the architects and designers Antonio Citterio, Michele de Lucchi, Massimiliano Fuksas, Piero Lissoni and Mario Pedol and the chefs Andrea Berton and Davide Scabin.

Fondazione Altagamma has been honoring the best in Italian industry, culture and creativity since 1992, promoting the excellence and the unique qualities that go into the best of Italian products and lifestyle worldwide. The Imprese Altagamma are international ambassadors representing the Italian style throughout the world. They may work in the worlds of fashion, design, jewelry, food, hospitality, transportation or wellness. The Altagamma Honorary Council was created in 2002 to reinforce relationships with international businesses and institutions that make a positive contribution towards promoting the Italian tradition of excellence and Italian lifestyle in their own countries.

Since 2013, Altagamma’s International Honorary Council has also been open to Italians who, with their know-how and creativity, help make Italian’s culture for excellence known worldwide in all sectors. Lamberto Tacoli, Vice President both of Altagamma and of Nautica Italiana, an Italian nautical association that is affiliated with Altagamma, and President and CEO of CRN, presented the honorary membership to Mario Pedol with these words: Mario Pedol is unanimously considered to be one of the most important designers of top level yachts, and he collaborates with the most important shipyards in the world. He did the exterior design for Azzam, the 180 m yacht owned by a member of the UAE royal family that is currently the largest privately owned yacht in the world. Mario Pedol has brought Italian competence, entrepreneurship and Italian style to the most beautiful yachts in the world and we are happy to welcome him as an Honorary Member to the Fondazione Altagamma.

The following day, Thursday Novembrer 26th, Carlo Calenda, the Italian Vice Minister for economic development, opened the fifth Altagamma Day and stated objectives to raise the worldwide use of Italian brands by 50%. The aim is high, but Altagamma, in keeping with its mission, intends to use public/ private partnerships to reach its goal.

The conference concluded with a round table discussion with entrepreneurs and top managers from some of the best and most important high level Italian businesses: Nerio Alessandri, President and CEO of Technogym, Claudio Domenicali, CEO of Ducati, Claudio Luti, President of Kartell, Michele Norsa, CEO of Salvatore Ferragamo, Lamberto Tacoli, President and CEO of CRN, Ferretti Group.